The Earth is mostly covered by the bodies of water that make up the 71% of our planet. Most people may have heard of the water cycle, but many are not fully aware of the whole process. As long as we know that we have the water to quench our thirst, to clean our body and to use in our other water consumption activities, we are happy. But learning something about the water cycle will make a difference to our understanding about our environment and resources here on earth provide for our well being via our convenient water taps.

HOW DOES THE WATER CYCLE WORK? 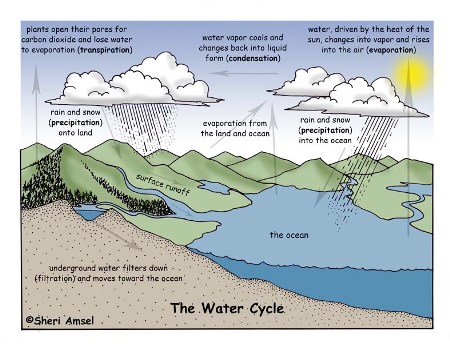 Also called the hydrologic cycle, the water cycle is a series of water movements in its various forms. Water moves about the earth and undergoes different transformations as it goes from the sky to the Earth and back to the sky again.

Since the whole process is circular, thereâ€™s no real identifiable starting point for where the water forms and where it disappears to. Water changes states from liquid to solid but it never really does disappear. It takes the form of rain, snow, ice, hail, vapour as it moves from one place to another like from clouds to ocean to clouds to river â€“ the process repeats in a cycle through precipitation, evaporation, runoff and condensation.

Looking at how the water cycle works is like staring at a big circle of motions. Sun generally serves as the element that drives the water cycle. With the heat itâ€™s giving out, water from the oceans and seas evaporates on air as vapour. The rising air takes the vapour up into the clouds together with something called evapotranspiration, or the water that transpired from plants and Earthâ€™s soil. Cooler temperatures will then cause water vapours to float around as clouds until it falls down back to lands and oceans through precipitation, which takes the forms of either rainfalls or snow. Some precipitation falls in snow form are built up as glaciers which last for thousands of years while the snows in other places melt during the spring and summer and flows back to stream and river until it reaches again the oceans and the whole water cycle repeats itself all over.

1.Â  EVAPORATION – is a form of phase transformation from liquid to gas, of which takes place only on the liquidâ€™s surface. The transformation is caused by the heating up of the liquid as result of the sun rays. It also includes evapotranspiration where water comes out from plant and soil in the form of gas.

2. CONDENSATION – as the water vapour rises up to the sky, the cooler temperature there cause the vapour to condense or be transformed to liquid on air, creating clouds and fog. Â Something called advection also happens with movement of water through the atmosphere. Without advection, water would just fall back to where it evaporated (mainly in the oceans), which would mean very little rainfall on land that is used to grow crops or rear animals for our consumption.

3. PRECIPITATION – happens when the vapour that condensed falls to the ground or oceans in forms of rain, snow, or sleet. It occurs when a part of the atmosphere get saturated already with the water vapour. Some precipitation falls never reach the ground because they are intercepted by plant foliage, which will eventually evaporate back to the atmosphere.

4. RUNOFF – there are diverse ways in which water flows across the land either by surface or channel runoff. Water moves over land surfaces or may seep underground, into subterranean aquifers from which natural mineral water is extracted for our consumption or until it reaches the ocean after breaking the surface and flowing into streams and rivers.